McKinsey report shows: The economic value of the Internet of Things will increase further until 2030.

In 2015, the McKinsey Global Institute published a research report titled: ''The Internet of Things: Mapping the value beyond the hype''. The report analyzed the economic potential the IoT could unleash by considering hundreds of use cases in the physical environments in which they could be deployed. Six years later, in a new report, "The Internet of Things: Catching up to an accelerating opportunity," the analysis has been updated to estimate how much of that value has been realized. But also how the potential value of IoT could develop in the next ten years and which factors explain both. In this article, Comgate summarizes the report's key findings.

The IoT market has grown significantly in recent years, but not as fast as expected in 2015.

The Internet of Things has faced “headwinds” in change management, cost and cybersecurity, particularly among enterprises. The new research shows that IoT offers significant economic value potential, particularly in standardized manufacturing environments, but companies need to scale to realize this potential.

The potential economic value of IoT is large and growing.

IoT enables us to bring the digital and physical worlds together in a way that could have profound implications for both society and the economy. For example, the benefits could lie in improving business operations, managing physical assets, and health and well-being. In this way, IoT can be the beating heart of digital transformations.

The research estimates that by 2030, the IoT could generate $5,5 trillion to $12,6 trillion in value worldwide. This includes the value consumers and customers receive from IoT products and services. 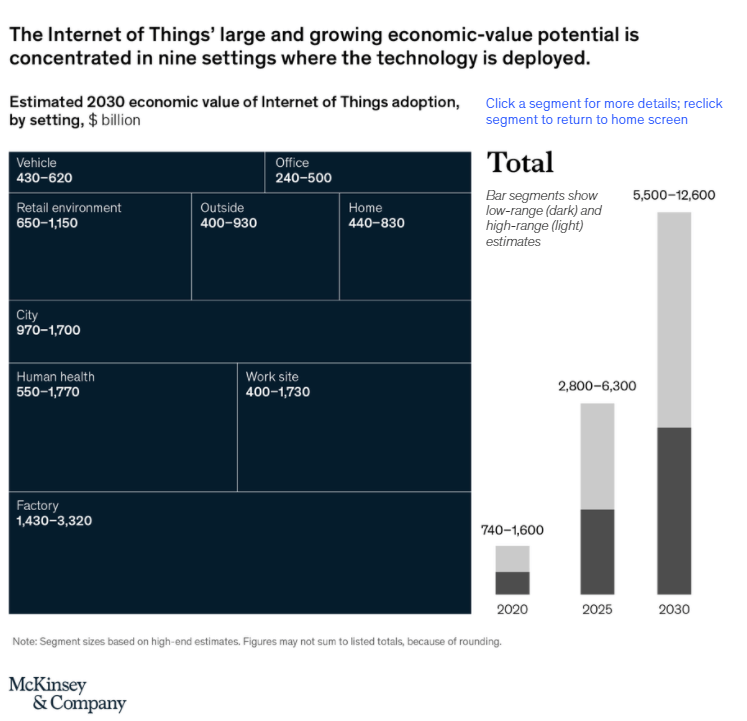 The figure above shows the potential economic value of the IoT broken down into nine settings. Research shows that factories will account for the largest amount of potential economic value from the Internet of Things, about 26% by 2030. Based on the research, the greatest potential for value creation in the factory environment will come from optimizing operations in manufacturing, making day-to-day management of assets and people more efficient. Overall, operations management applications in the manufacturing sector could account for about 32% to 39% of the total potential economic value of the IoT in the factory environment. This is equivalent to about 0,5 trillion to 1,3 trillion dollars in 2030.

Human healthcare comes in second, accounting for approximately 10 to 14 percent of the estimated economic value of the IoT by 2030. Over the past five years, the perceived value of IoT solutions within healthcare has increased. From connected glucose and heart monitors for patients with chronic diseases to mass-market solutions that monitor physical activity. IoT solutions are not only used by individual customers, but are also offered by some insurers and governments as a way to improve patient health and outcomes. The COVID-19 pandemic may have accelerated the adoption of IoT solutions in healthcare. As the world struggles with both containment of the virus and a safe return to the workplace. 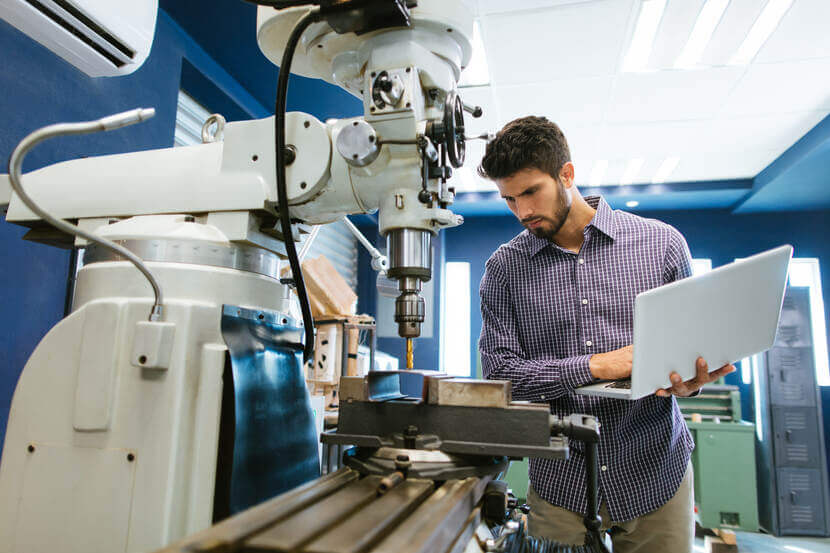 As a result of these dynamics, B2B applications are expected to account for 2030 to 62 percent of the total IoT value by 65. In economic terms, this equates to about $3,4 trillion in the low-end scenario and about $ 8,1 trillion in the high-end scenario.

The IoT market is growing rapidly. Growth may be slower than expected, but that's not because of a lack of confidence or belief in the impact technology can have. Research rather shows that operational factors hold back the market. If the IoT is to deliver on its potential, businesses and their customers must tackle these headwinds. Would you like to know more about IoT applications in your industry? Contact sales@comgate.io or call:  + 318 5111 0839. 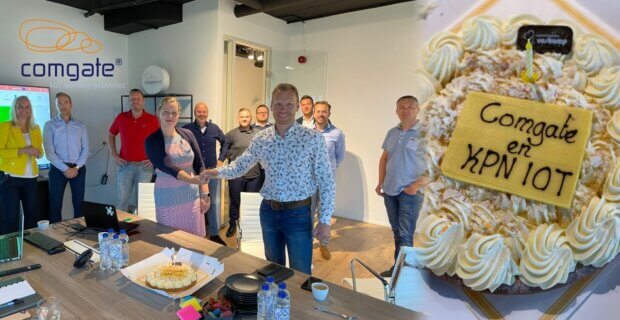 First class Connectivity for your devices via KPN network

KPN IoT is an important partner for Comgate, because KPN has stood for the quality network for years. Customers can always count on privacy and security as their top priority. We recently celebrated our 1-year partnership in which we have jointly provided many customers/partners with connectivity.
Read more 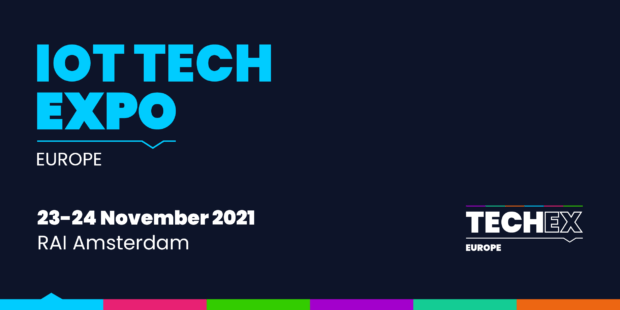 Europe's leading IoT conference and event will take place this year in the RAI, Amsterdam on November 23-24 and virtually on November 30 – December 1. This year, Comgate and Capestone will be part of a two-day trade fair in Amsterdam.
Read more
© Copyright 2022 Comgate
Privacy Statement Cookies Terms and Conditions
Design & Development Team Creative